A prototype pollution vulnerability has been reported in Parse Server. This vulnerability is due to improper input validation for the DatabaseController.

This vulnerability has been assigned the Common Vulnerabilities and Exposures (CVE) identifier CVE-2022-24760.

A remote unauthenticated attacker uses this exploit to inject properties in Object.prototype, or modify existing ones. Successful exploitation could result in; denial of service as the software encounters objects with unexpected properties, or properties with unexpected values. In the worst case it could lead to the execution of arbitrary code on the target server.

An attacker could for instance leverage the prototype pollution vulnerability to unlock a code path in the Node.js BSON module which evaluates arbitrary Javascript code. MongoDB uses the BSON format for storing data internally, and over the network. The name “BSON” is based on the term JSON and stands for “Binary JSON”. It is a binary form for representing simple or complex data structures, including associative arrays (also known as name-value pairs), integer indexed arrays, and a suite of fundamental scalar types. The BSON format also includes a Code data type to store Javascript code. You can store such an object in Parse Server by sending the following HTTP request: 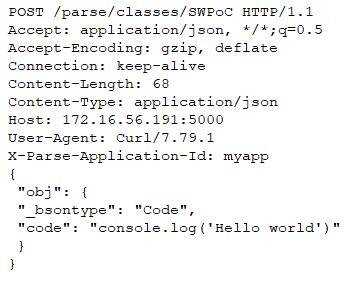 When the object is later retrieved from Parse Server via an HTTP GET request, it is deserialize by the function deserializeObject() in lib/bson/parser/deserializer.js from Node.js BSON module. When encountering a Code data type the function takes one of two code paths, depending on the value of the boolean options[‘evalFunctions’]. By default this property is undefined and the function returns a string containing the Javascript code; however if options[‘evalFunctions’] is true, the function evaluates the Javascript code and return its result. By polluting Parse Server and injecting the property Object.prototype.evalFunctions an attacker may unlock the second code path and gain code execution on the server.

• The target system must have the vulnerable product installed and running.
• The attacker must have network connectivity to the affected ports.

The risks posed by this vulnerability can be mitigated or eliminated by:
• Blocking the affected ports from external network access if they are not required.
• Filtering traffic based on the signature above.
• Upgrading the product to a non-vulnerable version.
The vendor has released the following advisory regarding this vulnerability:
Vendor Advisory

Microsoft Security Bulletin Coverage for May 2022
Scroll to top