MySQL is a popular open-source implementation of a relational database that supports the Structured Query Language (SQL) for querying and updating stored data. Communication with the database occurs using the MySQL protocol. As with other database implementations, MySQL supports a number of database storage engines, with InnoDB as the default backend.

A buffer overflow vulnerability has been reported in Oracle MySQL. The vulnerability exists in the InnoDB memcached plugin component.

A remote, unauthenticated attacker could exploit this vulnerability by sending a crafted packet to the vulnerable server. Successful exploitation will allow an attacker to execute arbitrary code in the context of the application.

This vulnerability has been assigned the Common Vulnerabilities and Exposures (CVE) identifier CVE-2021-2429.

A heap buffer overflow vulnerability exists in MySQL InnoDB-memcached plugin when it is handling the incoming get command. This is performed in the innodb_get() function. When there was “@@store_name” notation inside a get command, the vulnerable function will execute the code branch to switch tables. During the implementation, it will retrieve the schema (db_schema) and table (db_table) information using the supplied store_name, and build the table_name by following format string (depending on Windows platform or not):

The attacker sends a malicious Memcached get request to the target server. The vulnerability is triggered when the server processes the malicious request.

The following application protocols can be used to deliver an attack that exploits this vulnerability:
• Memcache, over port 11211/TCP 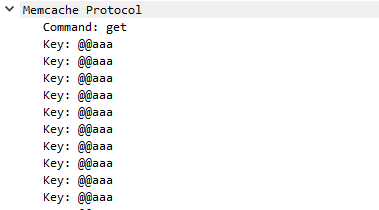 Listed actions that may be taken in order to mitigate or eliminate the risks associated with this vulnerability.
• Limit access to the database to allow trusted users only.
• Restrict remote connections to trusted hosts only.
• Filter attack traffic using the signature above.
• Upgrade the vulnerable product to a non-vulnerable version.
The vendor, Oracle, has released the following advisory regarding this vulnerability
Vendor Advisory