As with many other attacks, this campaign starts with a phishing email that distributes the malicious ISO malware as an email attachment.  ISO file is named to look like an image file and the contents of the email messages vary but spoofed to look like it’s coming from one of its vendors and encourages user to open the attached file. An ISO file (referred as an ISO image) is an archive file that contains all the information that would be written to an optical disc. ISO files are commonly used to create a backup of a CD or DVD. They’re also very useful for distributing large programs over the internet as an ISO image can handily contain all of a program’s files in a single file.

ISO file is used in this attack as many email gateway scanners don’t scan ISO file attachments properly. This may be due to the fact that ISO’s tend to be larger in size. In the past, third party software utility is required to open an ISO file, but modern versions of Windows (Win 8 & later) feature a native ISO mounting tool. Opening an ISO is now as simple as double-clicking the file. This increases the chances of the target opening the file. All the ISO files observed in this campaign are of size 1-2MB.

The executable file “SKMBT#2019-04.exe” embedded within ISO, is shown below.

The malicious payload presented as a single exe file, is actually an AutoIt Interpreter with the AutoIt compiled script embedded into it as a resource. Analyzing the file using PEStudio tells that it’s an AutoIt Compiled script. 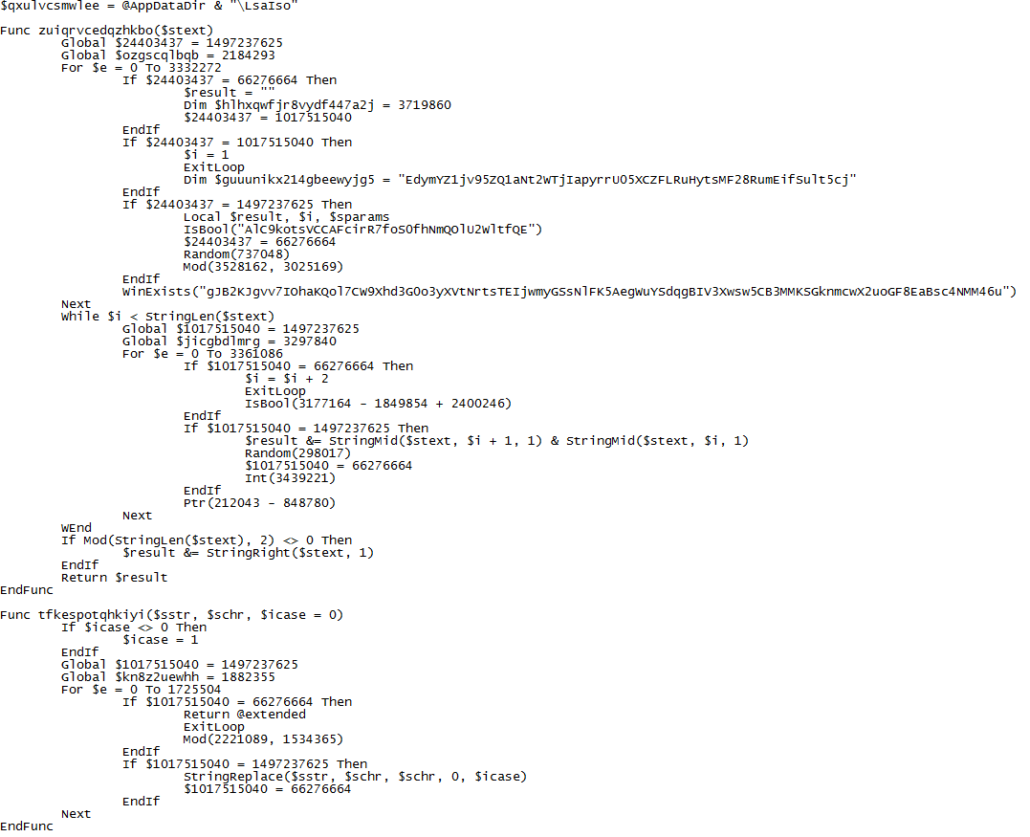 String “NanoCore.ClientPluginHost” that belong to NanoCore RAT is found in the memory.

NanoCore is one of the most sophisticated RAT (Remote Access Trojan ) out there. This malicious program uses NanoCore’s plugins to take control of victims machine.

Upon execution, it exhibits the following behavior.

It exits with an error dialogue if debugger is present. It performs the DNS lookup for “billionscome1.duckdns.org” and establishes connection with the server 191.101.150.90. Most of the similar malicious programs used in the campaign perform DNS queries to *.duckdns.org.

It creates a copy of itself  and drops it into the AppData directory along with a malicious VBS script. Then, it schedules a task using the following command. This task is called “NAT monitor”.

The NAT monitor task is made to run “Regasm.exe” and not “natmon.exe”. This malware starts Regasm.exe process in the suspended state with CreateProcessA(0x4 CREATE_SUSPENDED process creation flag).  It retrieves the path to itself and passes it as an argument to the process hollowing function. Process hollowing function replaces Regasm content with the malicious executable and resumes execution.  Now the execution of the malicious code is masked under a legitimate process , as the path points to legitimate process “C:\Windows\Microsoft.Net\Framework\v2.0.50727\RegAsm.exe”.

Once poisoned, RegAsm.exe can be used to establish connection to the C2C server, install keylogger/ mouselogger and other elements to steal users credentials and perform financial transactions from the same computer of the client.

It captures all the user keystroke information and writes it into an encrypted file called “KB_28549343.dat”

It also contains functionality to simulate keystroke presses, it may perform financial transactions with the stolen credentials from the same computer.

VirusTotal threat intelligence graph of this campaign is shown below. 1000’s of similar malicious files with different file hashes observed in this campaign. SadComputer ransomware gives victims only 5 minutes to pay up