Control Web Panel(CWP) is a advanced Free and PRO web hosting panel that gives flexibility to effectively and efficiently manage your server and clients.
Control Web Panel 7 versions prior to 0.9.8.1147 suffer from an unauthenticated remote code execution vulnerability.

Following is an example of exploit :

Decoding base64 gives us following code :

The code is a command line that runs a Python script that creates a socket connection to an attacker controlled IP address and port number specified within the script. Once the connection is established, the script uses the os.dup2 function to redirect input, output, and error for the script to the socket.This allows the script to run a shell command, in this case “sh”, and receive input, output and error through the socket connection. The pty.spawn function is then used to spawn a new process in the connected shell.
The command “login=$(echo” is setting the variable “login” to the output of the command “echo”. Then, the Python script for creating a socket connection and spawning a shell is run. After that, the output of that command is piped to the command “base64 -d” which decodes the base64 encoded text, and then the final command “| bash” is used to execute the decoded output as a command in the bash shell.
Overall the attacker is trying to open a reverse shell connection to IP address and port specified in the Python script. 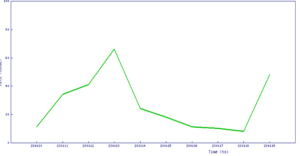